Madeira and the Azores were discovered in the 15th century by Portuguese explorers, but it took a global pandemic to put the two Atlantic archipelagos firmly on the British radar as WFH destinations.

Infinitely less touristy than the Balearics, and not as scorching hot as the Canary Islands, the Portuguese islands are having their moment.

Their secluded location means that, unlike mainland Portugal, they have been on travel green lists for most of the pandemic. Add in the mild climate, good broadband and widely spoken English and you have the perfect places to work from home.

There is the added bonus of the golden visa residency scheme (requiring an investment in a business or one in property of €500,000, reduced to €280,000 in low-density areas), which will expire at the end of the year for cities and coastal locations on the mainland, including Lisbon, Porto, Sintra and the Algarve, but will continue in rural areas and in the Azores and Madeira, Portugal’s two autonomous regions.

“Madeira has a British ring to it and English permeates the island. Everyone here speaks English,” says Anne Marchington, a British-born estate agent with the local agency ImoPalheiro (imopalheiro.com), who has lived on the island for 23 years.

“We started selling properties as second homes to British people 15 years ago,” she says. “Now, between Brexit and the pandemic, we get more enquiries about people willing to relocate here.”

The archipelago sits 550 miles away from the Portuguese coast and some 250 miles north of the Canary Islands. Madeira is the largest and most populated island of the group, with about 90 per cent of the population living in the capital, Funchal.

The island has a historical connection with Britain: it was briefly occupied by the British Army at the beginning of the 19th century and a number of families settled there and started exporting the famous local wine. Brits are the second largest expat community (after the Venezuelans).

The people looking to relocate, Marchington says, are usually retirees or digital nomads who want to work from home. Madeira is in the same time zone as the UK, has fibre broadband and is served by direct flights (four a day from London, but also from Manchester and Birmingham) that connects it in just over three hours.

Jay Trivedi is a London-based British software engineer who came to spend a month working remotely from the island after the first lockdown — in October 2020. “Madeira worked for us in theory as my girlfriend loves the mountains and I love the sea,” he says. “The world went back into lockdown shortly afterwards and flights were grounded, meaning that we were essentially stranded. That gave us the whole island to explore with locals, residents and almost no tourists.”

Trivedi, 38, and his girlfriend loved it so much that they decided to buy a house. The three-storey, five-bedroom house spans more than 5,000 sq ft and has a garden of the same size. The couple paid €375,000 (about £322,000). “It has an unbroken view over the sea over which the sun sets,” Trivedi says. “I could work for 40 years and never get close to affording a similar property in the UK.”

He says that when they log off after work they can chose between hiking in the mountains, swimming in the sea or sitting on the beach drinking a poncha, a local rum-based cocktail.

“I love that every evening and weekend feels like you’re on holiday,” he says. “The quality of life here is incomparable to a big city in the UK, especially that of London.”

Properties in Madeira start from about €150,000 for a small flat and €200,000 for a townhouse, but can cost more than €500,000 in the most desirable locations. “Madeira is not cheap,” Marchington says, adding that a shortage of land to build on is pushing up prices, especially in Funchal.

Although John Mather, an expat who runs a consultancy for British people relocating to the island, says that prices are still “modest” compared to the most popular areas in mainland Portugal. “Typically a British person selling in England and buying in Portugal will free up capital to enjoy in retirement,” he says.

There are also tax incentives. Under the islands’ non-habitual residency scheme (NHR), foreigners who live on the island for more than 183 days a year pay only 10 per cent tax on their pensions for 10 years, while dividends from the UK are tax free — especially relevant for some given this week’s tax announcement. 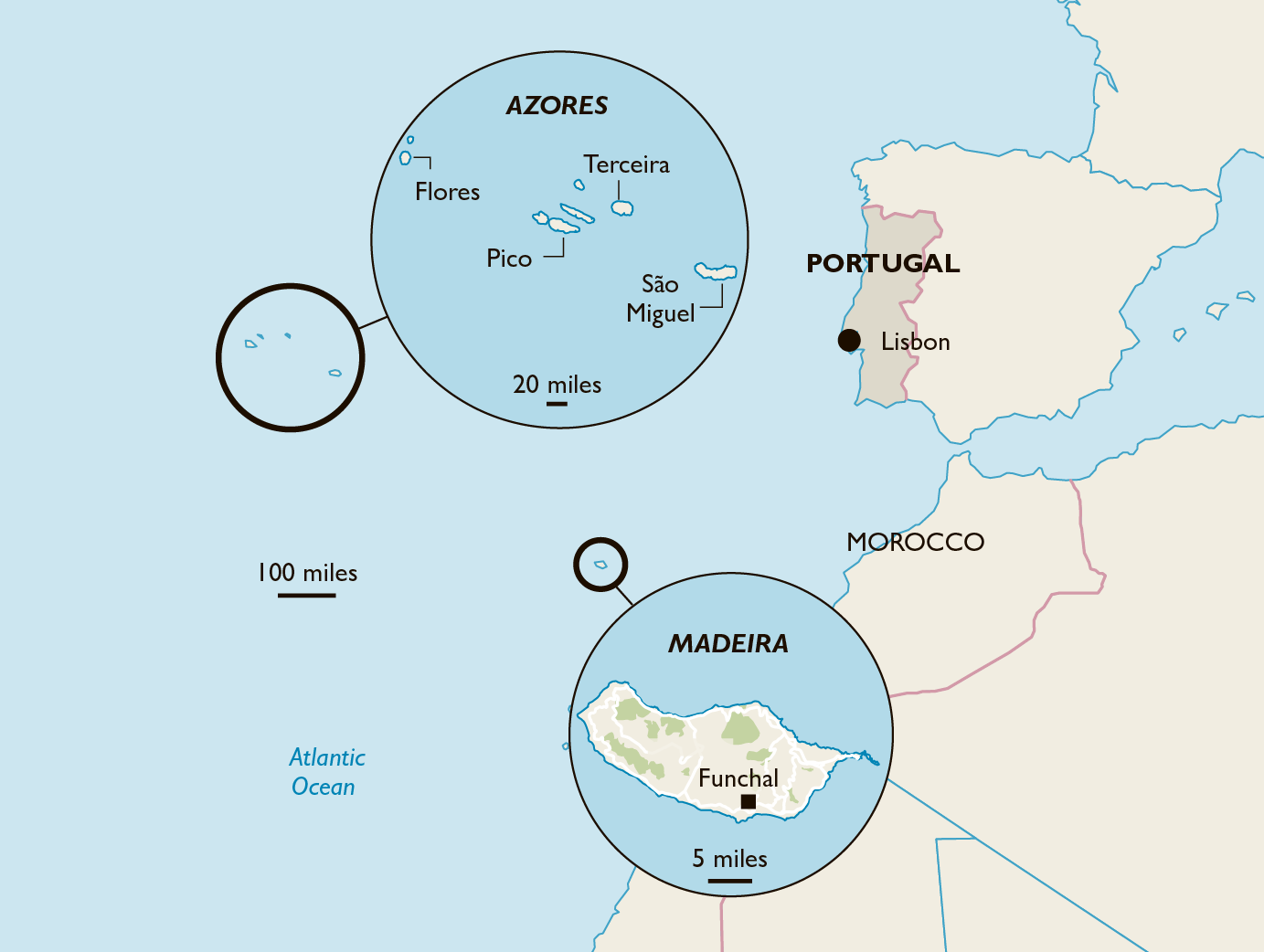 If Madeira was already known to Brits, the Azores were slightly more obscure. They are a volcanic archipelago composed of nine islands, located 870 miles west of Lisbon. Wilder and greener than its southern counterpart, they are known for their hiking trails and black-sand beaches. The weather here is cooler than in Madeira but warmed by the Gulf Stream and geothermal activity, meaning the temperature is rarely higher than 25 degrees or lower than 12.

“The Azores are blessed with beautiful landscapes,” says Joaquim Cunha Reis, senior real estate consultant at Goldcrest, who has just published a guide to buying property in Portugal (portugalbuyersagent.com). “One can live seven different lives in all the different islands.”

The Portuguese agent says that he and his compatriots have been holidaying on the islands for decades but that they were “relatively forgotten” by international tourism. “It was Portugal’s best-kept secret,” he says. “This is definitely changing.”

That is, if it hasn’t changed already. The islands were packed this summer, with a record number of tourists — plenty were home hunting too.

Thomas Kwai Lam, a Boston-born, California-based web architect, went on holiday to Portugal in September last year and ended up living in Ponta Delgada, the Azores’ capital on São Miguel island, for nine months. He decided to buy a property and is moving in next week.

Lam, 60, says it was like coming home. “It’s Hawaii meets Scotland,” he says. “My dad was Chinese-American from Hawaii and my mother American with Scottish ancestors. There’s a greenness and a lushness, together with these volcanic landscapes in the middle of the ocean, that reminds me of both countries.”

Lam chose to apply for the golden visa scheme, investing €350,000 on a local renewable energy project. Then he bought a two-storey townhouse, which sits in the old part of the town and spans almost 6,500 sq ft, for another €350,000.

Properties in the Azores are cheaper than in Madeira. Cunha Reis says that prices for a villa on São Miguel are about €1,000 per sq m, which means a four-bedroom villa would cost about €200,000. But again stock is limited, partly because of growing demand from foreigners. According to the Institute of National Statistics, prices have gone up 4 per cent per sq m over the past year.

“The Azores will definitely join Madeira and continental Portugal as a trend in the real estate market,” Cunha Reis says. “With the change in the golden visa scheme in 2022, the property market here should be really stepping into the limelight.”