The Chamber and its Corporate members Vilamoura World, Martinhal, Edge International and Ombria are all quoted in The Times today in a lengthy story about Where to Buy Property in Portugal to Get a Golden Visa by Zoe Dare-Hall.

Where to buy property in Portugal to get a golden visa

Charlie James, who runs a production company, is the kind of digital nomad who has been flocking to Lisbon in recent years. The 40-year-old, originally from Cornwall, moved to the Portuguese capital in 2019 with his French wife, Margaux, 41, and their children, Marlowe, three, and Léon, five.

“We moved for the lifestyle, the weather, the people and proximity to the coast,” says James, who is renting while they wait to complete on a €950,000 four-bedroom garden flat in the once-rundown, but now arty Intendente neighbourhood.

As James was living in Portugal before the UK’s transition period to exit the EU ended on December 31, he already has a residence permit. “But that runs out in three years,” he says. So James is looking at getting a Portuguese golden visa, a scheme that offers EU residency and free travel within Europe to non-EU nationals who invest at least €500,000 in property (or €350,000-€400,000 for renovation properties and in certain low-density and rural locations). “It will make it easier for me work-wise,” he adds.

Covid-imposed house arrest will no doubt have made many other Britons dream of following in the James family’s footsteps. And now Britain has left the EU, British buyers are eligible for Portugal’s golden visas for the first time.

But if you want to buy in Lisbon or the Algarve — the regions that attract most of the 50,000 British residents in Portugal — and get EU residency, you may have only six months to do so. From July 1, the Portuguese government is threatening to make these regions exempt from the golden visa scheme, to steer property investment to less developed areas.

The finer details have yet to be clarified. Would an Algarve villa located one mile inland be exempt, for example? “It’s one of the points that still needs final definition, but currently we’re looking at the whole of the Algarve,” says Jamie Robinson from QP Savills.

“Considering it generally takes three to four months to invest in Portugal,” adds David Moura-George, a director at Athena Advisers, who saw inquiries for Portuguese property from British buyers rise by 59 per cent last year compared with 2019. “We’re already seeing a big push from investors looking to secure the last remaining golden visa opportunities in these locations.”

It’s not the easiest moment to go house-hunting. The UK’s borders are closed to flights from Portugal, and only essential travel is allowed in the other direction. But those who have owned a property in Portugal since November 2012, when the golden scheme launched, can apply. And 90 per cent of Athena Advisers’ Portuguese sales last year took place remotely, using video calls.

A golden visa is “a fast-track way to continue to have freedom of movement within the Schengen countries,” says Christina Hippisley, general manager of the Portuguese Chamber of Commerce in the UK.

However, buyers who are happy to stick within the new 90-day limit, or who will spend less than the required minimum amount, need not apply. It won’t suit those wanting to relocate permanently either; the Non-Habitual Residents scheme, or the D7 visa may be more suitable, adds Hippisley.

The golden visa’s greatest asset is “flexibility”, says Chitra Stern, director of the Elegant Group, the developers behind the five-star, family-friendly Martinhal brand — including Martinhal Residences in Lisbon’s waterfront district of Parque das Nacoes, with serviced properties from €340,000 for a studio apartment.

“You only need to stay in Portugal for seven days a year, so golden visa holders can remain living in their original country while they decide what they want to do. But it gives families the option to relocate fully later, or spend more or less time in Portugal as their needs require,” says Stern.

Richard Goldstein, a retired company director in his seventies from Marlow in Buckinghamshire, recently bought a three-bedroom apartment off-plan at Martinhal Residences (similar properties cost from €1.2 million). Now he and his wife have recruited the English-speaking law firm EDGE to apply for their golden visas. “We don’t yet know how much time we, or our family, will want to spend there each year. The golden visa will no doubt be useful for ease of travel,” says Goldstein.

One deterrent is the need to invest the threshold amount in cash. But with an off-plan purchase, “as long as €100,000 is paid upfront, the golden visa process can be kickstarted. If you have applied by July, you have a year to complete the process,” says Stern, whose company is also the developer behind the United Lisbon International School in Parque das Nacoes, which opened last September with 150 pupils from 21 countries.

For those who are thinking about buying in Portugal, but don’t want to feel railroaded into committing before July, there are other options. It’s expected that the Algarve’s inland towns and sparsely developed resorts will remain eligible. At Ombria, a rural resort in the village of Querenca, near Loule, 10 per cent of buyers are British — and its Viceroy-branded residences fall neatly into the golden visa threshold price.

Or you could consider buying in an area that isn’t affected by the proposed changes, such as Alcacer do Sal, near the cool crowd’s summer hotspot of Comporta on the Alentejo coast, an hour’s drive south of Lisbon. “This region is stunning and offers far more for your money than Lisbon or Porto. It also offers a lower entry point to secure a golden visa: €350,000 if you buy an old property to refurbish, and from €280,000 if you buy in an area of low density,” says Frederico Mendoca, head of Cluttons Portugal. He is marketing apartments overlooking the River Sado, from €280,000 for two beds, and a new inland development in Villa Vicosa, near the Spanish border, with one-bedders starting at €280,000.

Whatever you choose, there’s no need to rush. “It will be a gradual transition to steering buyers towards inland areas,” says Patricia de Melo E Liz, chief executive of Savills Portugal. The next six months, though, may just offer British buyers the chance to buy a home in their favourite parts of Portugal — and use it whenever they want. That must surely be a case of having your pastel de nata and eating it.

Get a golden visa

A golden visa is a scheme that offers EU residency and free travel within Europe to non-EU nationals if they invest a certain amount in property.

If you want to invest in Lisbon, Porto or the Algarve, you will need to complete your purchase by July.

All but biometric screening can be done online. See the immigration service’s website for details (sef.pt). The easiest route, though, is to find a qualified legal representative that deals with golden visa applications.

You will need to travel in person to complete the biometric screening, so timing will depend on Covid travel restrictions and quarantine protocols.

The cost for an initial golden visa is €6,000 (£5,350) per family member. Renewal after one year costs €2,573. You can then renew twice more — for two-year periods — and after five years you become eligible for permanent residence or citizenship. “A single application allows you to apply for as many visas for your family as you wish to,” says Oliver Banks from Knight Frank. “Once complete, applicants can access the Portuguese healthcare and education system, and work and travel freely across the Schengen area.” 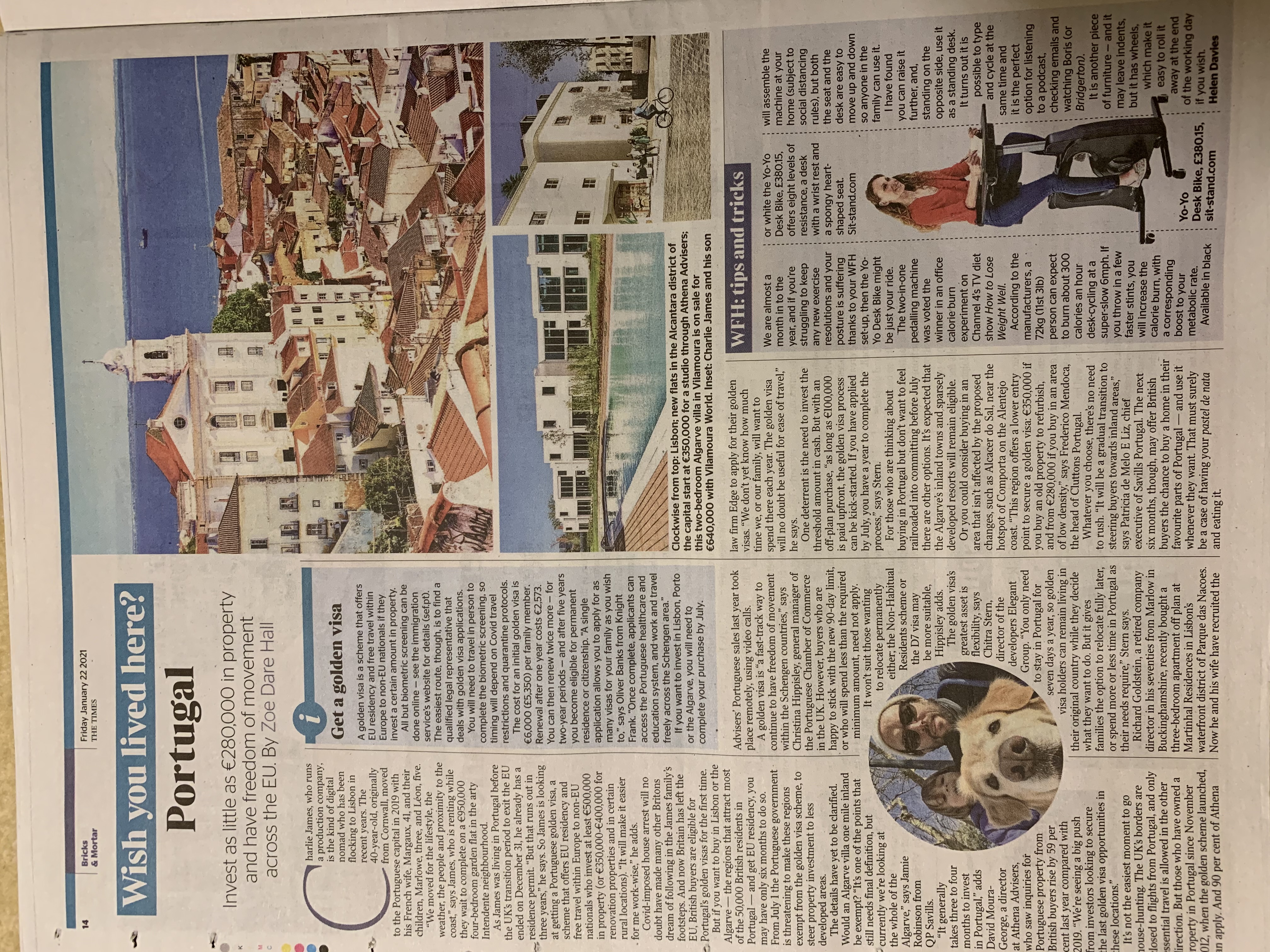