It is a persuasive testament to Portugal’s emerging importance in the worlds of mobility and internet technology that two of the world’s leading automotive brands are singing the country’s praises, and loudly, as they choose to locate R&D operations there.

BMW, which surveyed close to 100 cities for a new global software engineering hub, selected the northern Portuguese town of Porto, in partnership with Portugal’s Critical Software.

“We studied various locations, and in Portugal we found talent — a lot of talent — and a desire to innovate,” said BMW Group Senior Vice President of Electronics Christophe Grote.

Mercedes-Benz is equally effusive about the location for its first Digital Delivery Hub, which it opened in the Portuguese capital in 2017.

“Lisbon is establishing itself as the new ‘place to be’ for the digital world: it is precisely here that Mercedes-Benz wishes to drive its future digital transformation from premium automobile manufacturer to premium mobility service provider,” said the German automaker.

To anyone left who thought of Portugal strictly as a wonderful place to vacation and a singular producer of fine wines and olive oil, a more accurate rendering of Portuguese industry includes the many opportunities emerging through the convergence of automotive and internet technologies. BMW and Mercedes-Benz are hardly alone in having recognized this.

Encouraged by the country’s young and technically savvy workforce, investment incentives and a remarkably stable political climate, IT giants such as Google, Microsoft, Cisco, Siemens, SAP, Altran, Cloudflare and Huawei all have established digital research centers in Portugal employing thousands of people, primarily in Lisbon and Porto, both of which are home to major universities.

Google employs some 500 engineers at its support center in Lisbon for Europe, the Middle East and Africa. Siemens recently expanded the workforce at its Lisbon Tech Hub from 600 employees to nearly 1,000. BMW and its partner Critical Software, which was launched in 1998 from the University of Coimbra’s business incubator, have continued to hire through the COVID-19 pandemic and plan to hire more in 2021.

“Porto has an increasingly strong technological DNA,” says Critical Software Chairman Gonçalo Quadros. “That’s what we’re looking for. Porto is already a prominent engineering exporter, and it will be even more so in the future.”

Portugal’s emergence in the realms of electric and autonomous vehicles builds upon a strong foundation in automotive manufacturing. According to the Automobile Association of Portugal, Portugal’s automotive sector is responsible for 11% of total Portuguese exports, making it the country’s No. 1 export sector.

Having produced nearly a quarter-million vehicles in 2019, Volkswagen Autoeuropa in Palmela is the largest foreign industrial investment in Portugal and one of the most modern vehicle plants in Europe. One of four assembly plants in Portugal, Volkswagen Autoeuropa’s 2019 output total helped push the country’s vehicle production past the 300,000 mark for the first time. 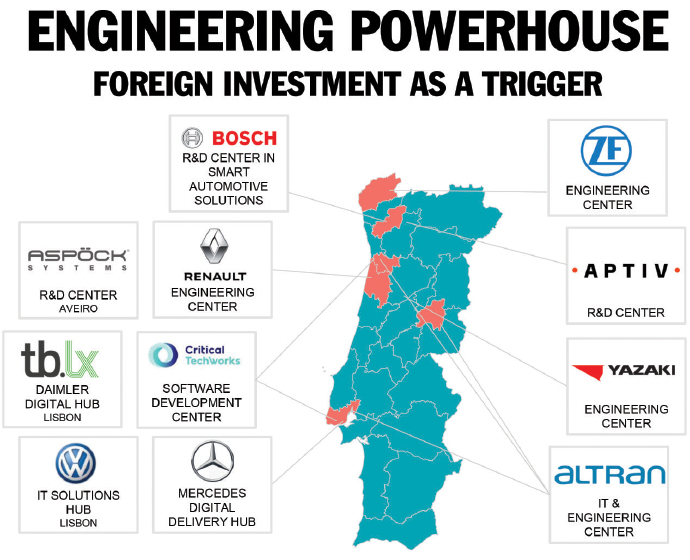 “Over the past decade, we have been very successful in ensuring that we have the full value chain of the automotive sector in Portugal,” says Luís Castro Henriques, CEO of Portugal’s Trade & Investment Agency, aicep Portugal Global. “If you set up an operation in Portugal, you have most of the value chain of the automotive sector already in place.”

As the industry goes electric, Portugal enjoys a value chain advantage that no European rival can match: lithium, the key component in EV batteries. Already Europe’s top lithium producer and site of its biggest existing lithium mine, Portugal is opening the door to expansive recovery of its 60,000 tons of known lithium reserves, making it central to Europe’s bid to cut its sole reliance on imported lithium. A top European Union energy official has said that lithium could be “the new gold” for Portugal.

“Our objective,” says Castro Henriques, “is to go from lithium mining to producing as many components as possible of the value chain of the electric vehicle. The lithium component gives us a huge advantage in the EV market.”

Already, Portugal is one of the world’s most enthusiastic EV adopters. It was the first country to deploy a fully operational and integrated network of EV charging stations, now numbering close to 1,000 nationwide. Portugal-based Efacec is a leader in “Plug & Charge” technology that allows vehicles to identify themselves to a charger and thus allay the need for a credit card transaction.

Incentives and Talent Sweeten the Pot

Portugal’s broad implementation of R&D tax credits is another indication of its forward-leaning posture toward EV development.

“We have invested heavily for R&D projects, especially in EV and autonomous driving,” says aicep’s Castro Henriques. “We have a strong set of incentives for companies coming in to create innovative projects to produce components out of Portugal for electric vehicles.”

In general, a base rate of 25% of eligible R&D expenses is offered as an incentive, with bonus percentage points offered for R&D projects that involve industrial research or cooperative projects between companies.

Cash grants of up to €1 million are available for qualifying expenses that include technical staff; acquisition of technical and scientific assistance, consulting and services; purchases of scientific and technical instruments and equipment; and costs associated with registration patents and utility models. For incentives that exceed €1 million, 25% comes as an interest-free loan and 75% is available as a cash grant.

Under a €35 million partnership deal with the Portuguese government and the University of Minho, Bosch launched an autonomous car initiative in Braga in 2019, with a focus on developing technologies to allowing for object detection and decision-making based on artificial intelligence and sensors. The Bosch investments, says Dirk Hoheisel of the company’s management board, “reflect our confidence in the expertise of Portuguese engineers.”

Likewise, technical talent was a major factor in Cisco’s decision to expand its presence in Portugal with a new Customer Experience Center in Lisbon to support clients in Europe, the Middle East, Africa and Russia.

“From a technical perspective, Portuguese engineers are very good,” says Miguel Almeida, general director, Cisco Portugal. “They are also very strong in the soft skills that are necessary to engineering and to global competitiveness.”

Castro Henriques believes that Portugal’s multilingual and outward-looking culture, cemented in its long history, is another of the country’s unique assets.

“We’ve been at globalization for 400 years,” he says. “We know how to work with the rest of the world.”